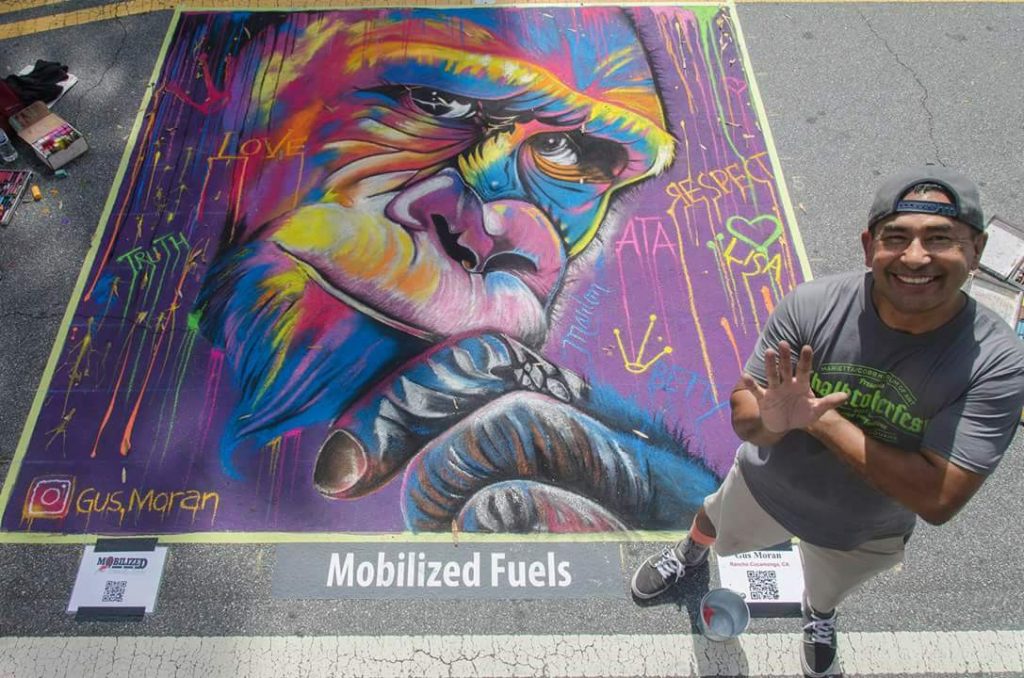 Gus Moran is a native of CA., raised in the city of Baldwin Park, just 15 miles east of Los Angeles. Gus is a single father raising 3 children, Christopher, Amanda and Sophia. He studied art at Mount San Antonio College and Fullerton College in CA., his early influences were Pablo Picasso and Romero Britto. Gus studied their use of cubism which was a big part of his early work while painting on canvas, using mainly acrylic paints. Romero Britto’s use of bright and bold colors still influences Gus’s work today. Gus began using chalk pastels in 2004 when a friend suggested he sign up for a chalk festival in Pasadena CA. This festival would become one of many that Gus now attends yearly. His favorite part of festivals is the interaction with the crowds and children, learning new techniques and the camaraderie there is between all the artist. Having been invited to events in Florida, Arizona, Colorado, and Washington along with many in CA., places like Mission Viejo, San Diego, and Ventura to name a few. Gus has also created large murals for KIND Natural Snacks at the Anaheim Convention Center, Walking With Dinosaurs at the Honda Center and the Festival of Arts in Palm Springs CA. He says art is more than a passion for him, it’s also therapeutic. “For me, art is more than the finished pretty picture you see, it’s years of struggle, pain, laughter, love, and hope that goes into any mural I paint”, he said. “It’s helped me to heal at some of the most vulnerable times in my life. Picasso said all children are artists, the hard part is remaining an artist when we grow up.”